THE ARTHUR C. CLARKE AWARDS
To celebrate Arthur C Clarke’s unique life and accomplishments the Foundation has established the Arthur C. Clarke Awards to recognize individuals who have made outstanding contributions to the fields of satellite communications, the sciences, and arts.  The Foundation usually presents three awards.

The “Arthur C. Clarke Innovator’s Award”
This award recognizes:  Initiatives or new inventions that had recent impact on or hold particular promise for satellite communications and society and stand as distinguished examples of innovative thinking.  The recipient would normally be an individual who is 40 or below in age.

The Arthur C. Clarke Lifetime Achievement Award
This award recognizes an individual, a group or an entity that exemplifies the values and accomplishments of Sir Arthur’s life.  The award honors substantial and endure contributions that relate the sciences and arts in meeting the challenges of contemporary life of the needs of tomorrow.

The Arthur C. Clarke Imagination Award
This award is given to someone in the creative arts who, like Arthur C.Clarke, have used their skills to help us all imagine technology and the future in new ways.  This award was first given in 2012.

Nominations
To submit a nomination for an award please email. Please indicate whether the nomination is for the Innovator’s Award, the Lifetime Achievement Award, or the Imagination Award.  The letter should describe in detail the justification in support of the nomination and include a curriculum vita tor the nominee or the nominees.  Each submission should be signed by two nominators. The awards are made possible through generous donations from corporations and individuals around the world. 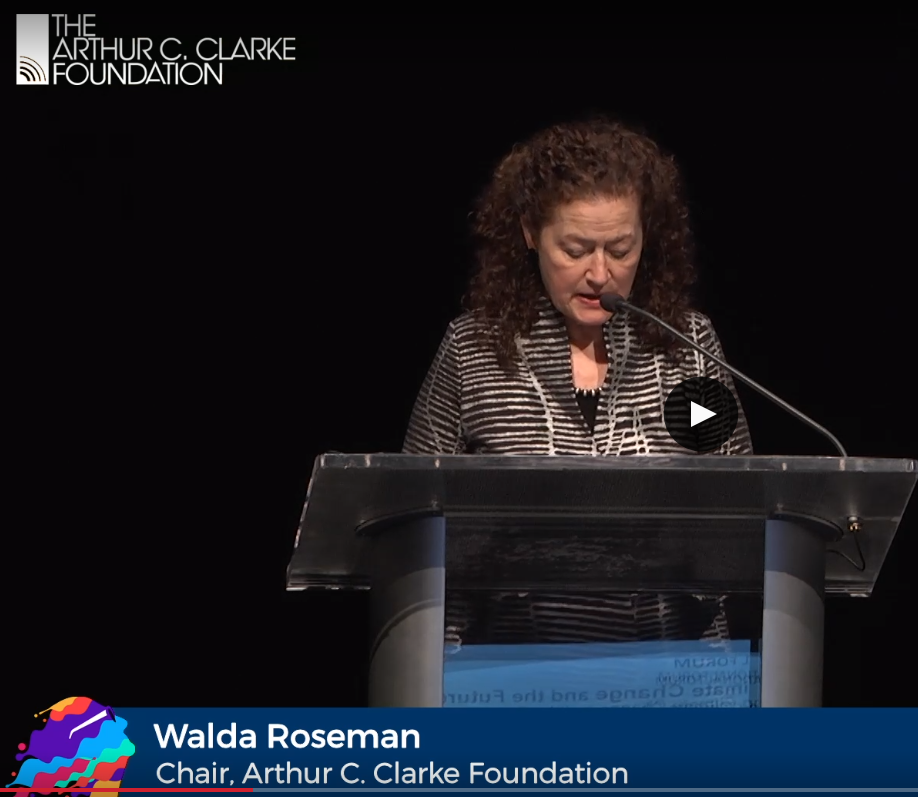 Award for Imagination in Service to Society:
Cixin Liu

Award for Imagination in Service to Society:
Kim Stanley Robinson, Author of science fiction, including the Mars trilogy

Award for Innovator:
Jeffrey P. Bezos, Amazon.com President, Chief Executive Officer, and Chairman of the Board

Award for Imagination in Service to Society:
Larry Niven, Author of Science Fiction and Fantasy Works for adults and children

Award for Imagination in Service to Society:
Ursula Le Guin, Author of Science Fiction and Fantasy Works for adults and children

​Sir Ken Robinson, PhD, was selected by the Foundation as its first-ever Imagination honoree. An internationally recognized leader in the development of education, creativity and innovation, Sir Ken works with governments in Europe, Asia, and the United States, with international agencies, Fortune 500 companies and some of the world’s leading cultural organizations.

2011: Elon Musk, founder of PayPal, SpaceX and Tesla, for his ambitious career-long pursuit of three “important problems” near and dear to the heart of Sir Arthur Clarke – the Internet, clean energy, and space.

2010: Guiliano Berretta, for inspirational leadership in the evolution of European telecommunications.

2009: Steven Squyres for pioneering work in the exploration of the planet Mars.

2007/2008: Peter Diamandis, for pioneering work in the promotion of personal spaceflight (Cosmos Club)

2005: Dr. Brad Edwards, for creating a company and taking the lead in the design of a space elevator that could move cargo to the Clarke Orbit from the Earth’s Surface 2005 (Cosmos Club)

2011: Freeman Dyson, Ph.D. renown physicist and mathematician, for his exceptional career across multiple disciplines, including quantum electrodynamics, invention of the Dyson series, his 20th Century work in the use of nuclear power for space flight, and design of the TRIGA, a small, inherently safe nuclear reactor used throughout the world for the production of isotopes.

2010: Simon P. “Pete” Worden, for pioneering work in astrophysics, and in military and civilian space missions.

2009: Ray Kurzweil, for lifetime achievement as an inventor and futurist in computer-based technologies

2006: Walter Cronkite, for bringing the wonders of space into our lives (Cosmos Club)

2004: Claude Goumy, former Chairman of the Board of Marconi-Matra, Founder of EADS (Cosmos Club)